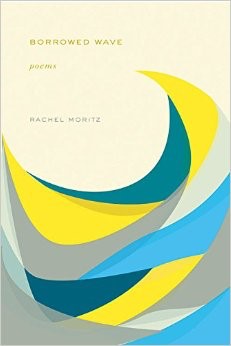 In her first full-length book, Borrowed Wave, Rachel Moritz embodies so many of the dualities that poetry is somehow, at its best, able to embody. Recently out from Kore Press in Tucson, this book is at once confident and questioning, isolated and intimate. Through bare and beautiful language, Moritz celebrates language while questioning its very structure.

I was first drawn to Moritz’s poems by the simplicity of image, the concision of line. She begins: “Branches of the pine trees sway in this other season.” With pared down imagery and close attention to rhythm, Moritz brings me to a meditative landscape, where “emotion hovers – her own soloist.” Yet this landscape is unstable. Once I am there, lulled by beautiful image and sound, I learn to question my footing. I begin to reconsider the materials of memory and the poem: object, image, language.

In the first section of her book, Moritz describes ways that people come to understand the world. In the title poem, she writes, “tea + cup (a deft granddaughter forms a thing in her mind).” As I enter the book, I see a self attaching to objects – galoshes, monkey cup plants – as points of connection. Each object containing an unspoken but felt significance: “outside a steel mobile glinted at night in the carport.” Moritz builds an intimate physical and emotional landscape from these objects, while maintaining their simplicity. She trusts the reader with leap from object to emotion. She writes, “She opens the car door slowly, as if / connecting dots.” When I read these poems, I feel as though I am connecting dots. Uncanny, intimate, lovely dots.

Yet, quickly, confidently, Moritz calls any certainty or narrative that I have built into question. Landscape – of memory, and the poem as archive of memory –  wanders, fluctuates, becomes unseen. In the poem “Lantua Song” she writes:

In this poem, I find myself mourning invisibility – loss of the physical, filtering of the real. Yet I also take pleasure in the incredible beauty of light/language distorted through form.

In the second section of the book, Moritz connects memory, the past, objects, to water and air. Pulling titles from Theodor Schwenk’s Sensitive Chaos: The Creation of Flowing Forms in Water and Air, Moritz settles, comfortably, into a wandering sort of memory. As the visual landscape becomes more water, more fluid, so too the form of the poem deftly shifts from lineated poems to prose.

As I move through these poems, I find myself intimately brought in, sometimes as the “I”, sometimes as the “you”, sometimes through the closeness of oddly familiar imagery. Yet Moritz reminds me, more and more as I move through the book, that there is a self in the poem. She is acutely aware of the finite physical world, and she tells me this: “I’ve got this body, real and failing.” She is also aware of the poet’s role in distortion, in the pain and loss that comes with using language to know and record memory. In the opening of the third and final section, she asks:

Have I done some harm to the pines and you
remembering scenes
distilled without verbs?

Moritz questions whether memory, transmitted though language, is too full of loss or pain. This implication of the self in both the beauty and harm of the poem is where Moritz’s work most excites me. She is unafraid to be both confident and questioning, and she uses image and form to bring the reader to a similar state. When I read these poems, I feel as though I am floating in salty water –  vulnerable, buoyant, awake. I experience wonder, a feeling that Moritz explores in the poem “Homozygous”:

With your lantern, your dark
wonder, you never turned down
any bravery of form

I see bravery in Moritz’s commitment to the poem, to using admittedly flawed language to capture beauty and explore knowledge. She explores instability throughout the book, but always through clear and simple language. At one point, Moritz asks, “That imagined space, I thought, while walking beyond the garden, could it be held inside me even as I shifted form?” Throughout the book, form and language shift as Moritz complicates narrative and brings in new source texts. Yet there is certainly a constant throughout her work. Something remains. Water is held in a glass, up to the light. These poems radiate.

Originally from Denver, Peyton Prater Stark currently lives in Tucson, where she studies poetry and book art at the University of Arizona. She is equal parts writer and teacher. Previous work includes teaching 7th and 8th grade Language Arts and developing writing workshops for 826 Seattle. Her work appears or is forthcoming in Eleven Eleven and Colorado Review.