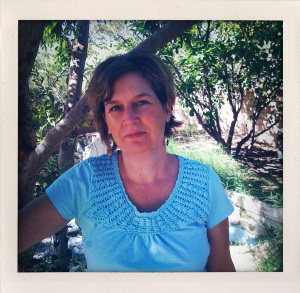 The beginning of Anthropologies feels like something you’ve remembered before—a frail mother recounts stories for a middle-aged daughter. But then, the daughter is 18, and she wears bell bottoms and a black tee shirt and argues with the mother about a boyfriend. The argument ends and it is Colorado in 1968, and the windows fog as a young girl dries dishes with a young mother, and suddenly you aren’t remembering—you are living in a world so specific and complete you can’t have passed through it before.

Beth Alvarado’s Anthropologies is a pile of perfectly ordered snapshots, so quickly and quietly stacked that soon the remembering becomes a world unto itself.   Alvarado is the daughter of Margaret, the niece of Dorothy, the younger sibling to a half-brother and half-sister born of a father who died in Saipan and a mother too early a widow. Margaret meets her second husband en route to a bridge game in Puget Sound, and Alvarado’s childhood ends when the family moves from Grand Junction to Tucson. “My father was a solitary man,” Alvarado says of her father. “How I hated him,” Aunt Dorothy says of her father, Alvarado’s grandfather.

So is the fabric of a family created, through memories stacked one on top of each other. Through the first section of Anthropologies, Notes on Silence, Alvarado remembers what she learned of her family as a child—the origins of the couple that would become her grandparents, become her parents, and the memories are associative, leaping from quiet deathbed memories to the bubbled promised of courtship.

While vivid, the moments in Notes on Silence, aptly titled, are quiet and dependant on Alvarado’s telling of them. It isn’t until the second section, Notes on Travel, that these moments begin to exist of their own agency—as experiences we inhabit ourselves rather than memories possessed by a narrator.  Notes on Travel begins as Alvarado meets Fernando, the man who will become her husband, but for now he’s just the waiter at an awkward formal dinner when she’s an awkward teenager. She’s 18, then, and travels to west Tucson, Hispanic Tucson, to live with Fernando and his family, and she could well have traveled to a different country.

She watches her mother-in-law pat tortillas on a stove. She takes an “old round green bus down South Sixth Avenue,” passing “the carniceria and the tortilleria and the storefronts painted bright yellow or orange or pink with blue letters and black wrought-iron bars over the windows, and the music of Spanish… all around.”  She absorbs the stories of this new landscape, with its thick layers of memory and history, and these stories alter her, change her own memories and her relationship to her own history. “I wanted to escape my parents’ life, to enter another country, but I hadn’t expected to find there barefoot children hopping from spot of shade to spot of shade as they followed their mother to the grocery,” she writes. 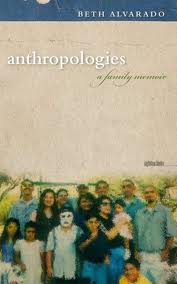 This world, the world between cultures, is the most firmly rooted in place—Tucson, in the 1970s and today—and it becomes, for me, the most vivid. Alvarado explores the intersection of Anglo and Hispanic cultures within this grounding, in relationships with new relatives, or thirty years into a marriage with Fernando, or quick experiences of a mixed-race son and daughter.

Anthropologies is sparse yet complete, a narrative forged out of fragments. The book explores memory and race and relationships, but after awhile, anthropologies is not just about this exploration—it is a memoir, after all, a story of a life, and Alvarado has funny friends and endearing moments. (“The fall picnic. We are standing in front of the salads. Cre-a-tive Wri-ting? the Japanese doctoral student in engineering asks me, spooning rice onto his paper plate, what is this? Cre-a-tive Wri-ting?”)

“Maybe my grandmother simply entered a room in another woman’s past and it felt like home,” writes Alvarado—and maybe that’s what she’s doing here, building rooms, and they start to feel like home.

For more on Beth and the book, check out yesterday’s interview with Beth Alvarado and please order the book, out now on University of Iowa Press.

Megan Kimble is noticeably more cheerful since she stopped commuting on the freeways of Los Angeles and started biking around Tucson. She runs, hikes, and loves breakfast and chocolate chip cookies.