High School, Hormones, and Telekinesis: A Review of Chronicle

All right, I’ll be the first to admit it: I’m a sucker for super hero flicks.

I grew up in the era of Nickelodeon’s short-lived The Secret World of Alex Mack, about a girl who could turn to a puddle at will, and Doug, whose imaginary alter ego, “Quailman,” fought the mad scientist Dr. Klotzenstein. On the weekends, I ran around my backyard with my younger sister, making nonchalant calls to the president on my telephone (a branch) and shooting invisible enemies with my branch-turned-ray-gun (a forked branch). Up until high school, I went to used bookstores and stashed $2  X-Men and Ghostrider (pre-that-Nicholas-Cage-absurdity-of-a-film) comic books in my closets, convincing myself and my parents that I was collecting them for future value even as the pages went from “mint” to “good” to “acceptable” beneath my oily prying fingers over long, restless summer days. Not to mention on one delirious road trip back from Colorado just before college, where my sleep-deprived friends and I spent the last 2 hours arguing heatedly over which super power would be the best to have.

Which is probably why, when I heard the film Chronicle was coming out – the story of three high school students who receive telekinetic super powers from a cave – a twinge of nostalgia, maybe even envy, hit me. Told in home-video, low-budget, found footage style reminiscent of Blair Witch Project, Cloverfield, and the great Norwegian film Trollhunter, Chronicle (2012) centers on Andrew Detmer, played by relative newcomer Dane Dehaan, a sullen, chili-bowled, proverbially luckless teen who decides to escape his hellish home life by taping every minute of his day. In pseudo-typical high school movie fashion, Andrew’s underdog status is thoroughly (almost painfully) established in the early parts of the film. We get to watch him be rejected by cheerleaders; kicked around by his classmates; screamed at by his alcoholic father, who blames Andrew for his mother’s sickness; and cold-shouldered by pretty much everyone at the high school. Essentially, take Spiderman’s Peter Parker and throw out the brainpower, and what’s left is Andrew Detmer. 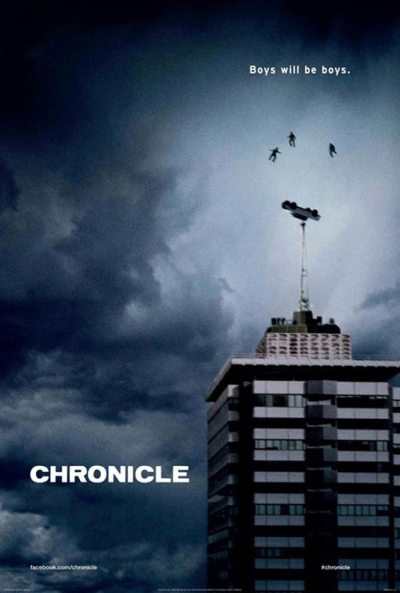 As the film continues, we follow Andrew, accompanied by his cousin, the budding high school philosopher, Matt (Alex Russell), to a rave with where Andrew, Matt, and Steve (Michael B. Jordan), the ever-energetic class president, stumble upon a hole in the ground emitting a bluish light and odd sounds. They travel inside to find a glowing crystal structure, the camera blurs among strange screams, and the screen goes black. The film picks back up, smartly I think, after what would be drawn-out “discovery” scene that’s been done to death in Spiderman, “Smallville,” and Unbreakable. Instead, we see the characters already fiddling with their powers – first alone in backyards, then at school, and eventually in public. They bond. They play pranks. They do very high school “dude” things: moving things around a table; turning a leaf blower on from yards away; knocking gum out of someone’s mouth; making a teddy bear chase after a child; changing parking spaces of a car. It’s everything, if you were a hormonal 17-year-old boy and telekinetic, you would do with your powers.

It becomes clear, however, by the time that Andrew knocks a honking, tailgating car off the road and into a lake, almost killing the driver, that his powers are the strongest as well as the most dangerous of the three. Yet, this disturbing scene is directly followed by one in which the boys learn they can fly, which, I know what you’re thinking, felt a bit contrived… right up until the point when they start throwing the football around in the clouds. This moment enacts a kind balance that the director, Josh Trank, uses often in the film – a balance between the fantastic nature of the situation-at-hand and the boys’ utter youthful enthusiasm in the face of it. By making these boys are perpetually more awed about what’s happening to them than the viewer, in addition to using the home movie style, the film never feels intrusive or forced. The characters’ sincere gusto in the face of these life-changing events makes these very same events feel genuine for the viewer, carrying the film through some of its more CGI moments.

Likewise, as these characters’ powers grow, so do the variety and interest of shots. Andrew figures out how to levitate the camera above his head and to follow his body almost unconsciously, which adds an element of cinematography – cameras spiraling upward, floating atop skyscrapers, for example – to the movie that it lacks in the first section. Some of the most vivid scenes, throughout the movie, are of Andrew alone in his room. Wisely, Trank lets these scenes breath on their own, omitting music for the extra-creepy and depressing sounds of Andrew’s mother’s hacking up god-knows-what in the back room. These scenes also give us the first hints of Andrew’s downward spiral – motivated by his mother’s sickness and, in one specific case, a drunken case of ED – in which he splits a spider apart with his powers, discusses his disturbing view of himself as “alpha predator,” and pulls the teeth out of a fellow classmates jaw.

And, just as Andrew begins to fall apart – wreaking havoc on Seattle – so does the found-footage aspect of the film. Camera phones, security cameras, and dashboard cameras start providing various perspectives on the (of course) final battle, which Trank uses to help to play down the high-flying, building-jumping, car-throwing aspects of this scene and, at the same time, keep the viewer grounded in the reality of what it would really be like watching this battle unfold from the ground. Like many other parts of the film, this final segment feels stripped down, bared, visceral, so pleasingly unlike the “Hulk Smash!” ideologies of the finale of recent super hero movies, where the camera ducks and weaves around flexed biceps, metal bent into balls, or projectiles and pavement zipping around the screen. As a result, even with a reportedly low 15 million dollar budget (“low” in the red-blooded American sense), Trank makes this film seem like the realest and grittiest super hero movie I’ve seen since Christopher Nolan’s The Dark Knight.

Part sincere, part hokey, part high school, part fantastic, Chronicle is a super hero film that doesn’t ever feel like a super hero film, with a villain that, even at the end, never feels like a villain. Sure, there’s some parts that rely on clichés – the bubbly blonde girl Matt falls for; the ever-crowded high school party at a mansion with a pool (seriously, who owns that mansion?); the stereotypical jocks foaming at the word “nerd.” But, unlike other Michael Bay-esque high-budget action movies, which rely heavily on special effects, close-up shots of glistening (as opposed to sweating) damsels in distress, and explosions for explosions’ sake, Chronicle uses the bond between these three characters and the close-in POV of its shots to show how a super hero could be made in real life, rather than a studio or green screen.

Adam Kullberg is an MFA candidate in non-fiction at the University of Arizona.

2 comments on “High School, Hormones, and Telekinesis: A Review of Chronicle”