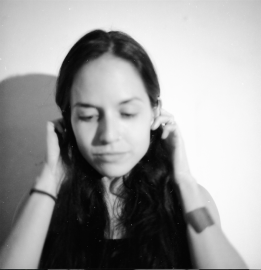 What is it about the genre or cross-genre you write in that interests you/draws you in?

I don’t do much to push against the borders of genre as such. But poetry is an intrinsic shape-shifter, and I love this; I think it offers potentially infinite opportunities to find freedom within constraints, to forge complicities between what words say and how they say it. I’m especially interested in the mysteries of voice and register, about in shifts and tensions and fruitful contradictions: who is the “I” (visible or otherwise) in a poem? What does it trust? What does it want the reader to trust? What does it want, period? What is it willing to disclose and why?

How does this published piece fit in with the larger thematic concerns that you see in your overall work?

I think a lot about intimacy amid multiplicity and chaos; about how to stop and make contact (with a person, a place, an idea) amid the overwhelming muchness of the world; about the way we are interpolated by what we observe; and about how transparently we need our memories, our memory, the fact of remembering, to reassure us. “Surfeit” tries in some way to engage with all of these concerns.

What are you influenced by?

Music (both listening to and making it) is an important influence. Not really in the sense that music directly shapes what I write; it’s more that it makes me think, constantly, about what it means to have a voice at all, and how to use it: how to help it assert itself, when to hold back, when to let loose. I’m fascinated by singers who have beautiful voices and strong technique but who aren’t afraid to sound harsh or messy when they need to.

I work as a freelance translator, and the practice of translating literature both fuels my own writing (I find it difficult to translate something I admire and not feel it fueling or affecting me as a writer, even indirectly) and complicates it sometimes (translating requires such a similar kind of focus and energy that, when I’ve finished my translatorly obligations for the day, I often struggle to make time and space for my own work). Lately I’ve tried to dedicate one day a week to writing or revising poems, no matter how much work-type work I may have, which has been enormously freeing and nourishing as a practice and reminder.

For fun, if you could pick one meal that matches the piece we published, what would it be and why?

I’d say enfrijoladas, a favorite dish found in many a Mexican market (like the one the poem alludes to)—drizzled with cream and scattered with sliced onion, of course (onion makes its own cameo appearance in the poem).

ROBIN MYERS is based in Mexico City and works as a translator. Her poems have appeared in journals like The Offing, Tupelo Quarterly, Tinderbox, Big Lucks, and New Millennium Writings (as the poetry winner of their 41st contest). Her poetry collections have been published in Mexico, Spain, and Argentina. She is an alumna of the Banff International Literary Translation Centre, the Vermont Studio Center, and the Community of Writers at Squaw Valley.