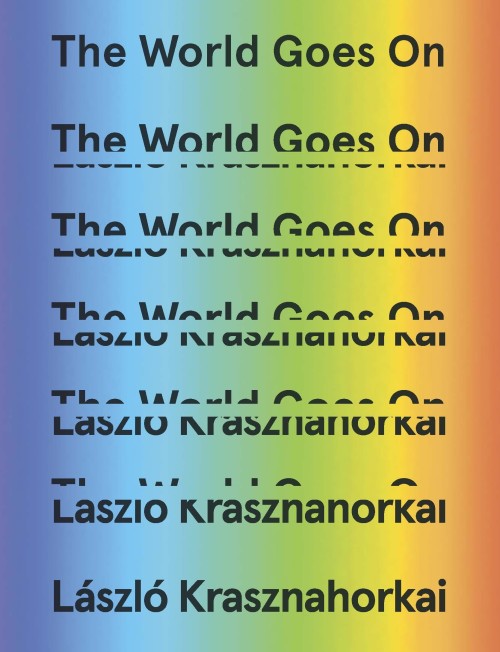 Speaking to the The Guardian as a finalist for the Man Booker International Prize in 2015 (a prize he later won), Hungarian writer László Krasznahorkai said, “If there are readers who haven’t read my books, I couldn’t recommend anything to read to them; instead, I’d advise them to go out, sit down somewhere, perhaps by the side of a brook, with nothing to do, nothing to think about, just remaining in silence like stones. They will eventually meet someone who has already read my books.”

Woe to those literalists who crouch now in the mud. To those who have not taken his advice and remain comfortably inside, it may be more useful to begin with his new short story collection, The World Goes On. The stories within reach toward philosophical and spiritual questions that haunt the periphery of thought, questions whose answers, as Krasznahorkai writes, lie beyond “the bewitchingly confined space of the human viewpoint.” The book doesn’t comfort you, but it does reward readerly cathexis with big, gorgeous gestures.

One of those gestures is the long, silk-spun periods of Krasznahorkai’s sentences, one of which will often occupy the whole length of a story. With this technique, every character or incident seems to move within the space of a breath. The first story in The World Goes On occurs in just one sentence, which goes on for nearly eight pages, expressing a desire that occurs later in “That Gagarin” and “I Don’t Need Anything from Here,” viz. to “leave this place.” The normal-length sentences of the later set of “lectures” titled “The Universal Theseus,” in fact, read as stylistically unusual for the collection, so prevalent is the all-encompassing long sentence.

The book’s main strength lies not in plot or characterization as much as in the philosophical daggers and beautiful phrases that pierce through the narrators’ obsessive interiority. In “Universal Theseus,” the narrator observes that “the road toward the fundamental things…leads through melancholy.” The title story, which reveals itself to be about 9/11 but also relates to the more fundamental disaster of death, moves through a searing darkness until “only one thing was completely certain: it had broken loose, it was closing in, it was already here.” The stories come alive when their metaphors, fears, and ideas meld together in a cohesive whole, and the language binds that whole.

Structured in three parts, “Speaks,” “Narrates,” and “He Bids Farewell,” The World Goes On ties together its stories with a guiding voice that first addresses the reader more directly, then recedes behind a stronger presence of third-person narrative, and finally ends the collection with a half-page goodbye, “I Don’t Need Anything from Here.” In this story, the guiding voice floats away back into the ether, away from the landscape of the previous stories, with language that seems not quite sorrowful but detached and tenebrous.

Krasznahorkai may be baffled by the idea of a reader first encountering his work because its material is the chaos and sorrow around us all the time. As written in “One Hundred People All Told,” there is no beginning to “the simultaneously existing and dissolving context of trillions of tangential facts.” The World Goes On considers not an entrance but an exit, its first line a plan for escape, “I have to leave this place.” But the way out is lighted, and as in “A Drop of Water,” in the distance we can see “the outline of the beauteous.”

JAMES BUTLER-GRUETT is a second-year MFA candidate in fiction at the University of Arizona. He is from Lincoln, Nebraska, and was raised by two opera singers.