What Stays Locked by Carl Lavigne

Corey is teaching me how to shoot his father’s gun. We haven’t got bottles or cans to shoot because Corey’s dad would notice anything missing from his liquor cabinet. He keeps that locked up tighter than the guns. So we shoot the trees in the backyard.

I have two problems: I like shooting guns more than I thought, and I like Corey more than I thought. We’re sixteen and the US just invaded Iraq, and there’s no reason yet to think the two of us kids will go to war, but I know I don’t want that, and I know I don’t want to enjoy anything that could be associated with it. I agreed to shooting because I wanted to be with Corey.

“What would you do if they started drafting people?” I ask.

Corey is counting how many rounds we’ve used up, doing the math of what looks like is missing. He shrugs.

I almost start sweating with relief.

“Besides, do you think there are lots of girls on base? Fat chance.”

“True,” I say, knowing next to nothing about truth or girls.

He loads up the revolver again and hands it to me.

“No,” he says. “Like this.” He adjusts my grip. I got it right the first time, but keep messing it up so he’ll touch me. I think he’s starting to get annoyed by it, and I don’t do it again.

I realize I’m smiling when I hand him the emptied gun. He smiles back.

“Best antidepressants in the world,” he says. He gestures to the tree we’ve torn apart. “And if they don’t work that way, they work the other way.” He mimes putting the barrel to his temple, and I have to stop myself from pulling it away from him. He laughs. I want to throw up. We shoot the gun until the trees start to look how the laughs sound. 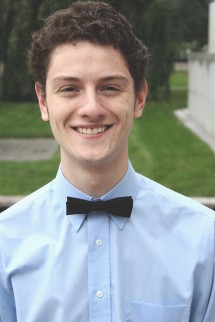 CARL LAVIGNE is a graduate student at the University of Michigan Helen Zell Writers’ Program, and a graduate of Emerson College. He has twice been a finalist for Glimmer Train‘s New Writers Award. He grew up in Vermont reading every book with a dragon on the cover. Send him your favorite Fall Out Boy lyrics at @CarlRLavigne on twitter.