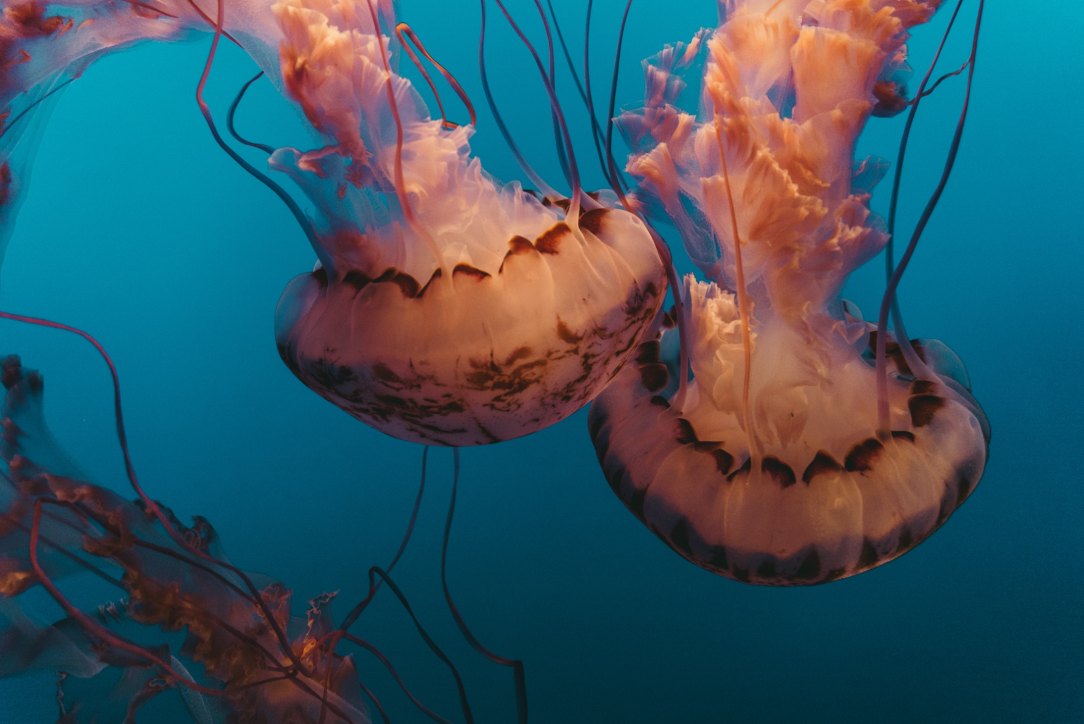 Jenny and the Squid | by Ariel Chu

She extended one arm towards me, then another. I allowed her ten limbs to encircle me, snake around my ribs, under my arms, between my clothed thighs. I got one glimpse of her pink, rubbery face before her hooked beak caught me. It clamped my mouth so hard I tasted blood.

The summer I turned fifteen, Jenny invited me to her family’s beach house. Jenny and I had been best friends since fourth grade, and this was the first time she was asking me to join a vacation. I felt that this was a turning point, the year we’d really show ourselves to each other. After weeks of bargaining with my parents, I arrived—toes in the sand on a cloudy day, the Atlantic stretching gray before me.

I watched, envious, as Jenny did handstands and skipped rocks. Then she picked a beached squid up by its head, sending it rocketing towards the surf.

“Check it out,” she said, and palmed another squid. Before I could speak, she lifted it to her mouth and bit into its bulbous head. I watched as her teeth split the sac, spilling its rancid guts onto the sand. I imagined sea lice hatching in her throat, some mid-Atlantic parasite burrowing its way into her intestine.

“God!” I said, disgusted and impressed. She looked at me in amusement, if I were the only person alive who’d ever judged her. I glanced away. Jenny did wild things on occasion— trying to prove something to me, though I never knew exactly what it was.

She tossed the broken squid at me, and I let it fall. “You’re no fun, Ariel,” she said.

I felt anger rise in me, but then she stepped over, slipped her hands in mine. I watched the perfect machine of her face form a smile. “You know I’m joking, right?” she said, and heat bloomed in my body. She squeezed my hands, once, and I felt myself forgiving her.

That night, Jenny got sick, though she made me promise not to tell. My parents’d get mad at us, she said, and then you’d never see me again, would you? I doubted it. Jenny was a troublemaker, a bad girl, but I was a good influence. Her parents took my word for everything, and I prided myself on my maturity.

Can I do anything for you? I kept asking. Jenny laughed, mocking me for my concern. But as the night stretched on, she went silent, then began to talk in her sleep. I woke up to her babbling feverishly, groping in the dark.

“Jenny, Jenny,” I whispered, trying to call her back to herself. In the anemic glow of the nightlight, her face was yellow, pinched. Her eyes were rimmed with a violent pink, and something dark dripped from her mouth. “Wait,” I stammered, then scrambled to the bathroom to find a towel.

When I returned, Jenny was quaking on the floor, a stream of black liquid flowing from her mouth. It smelled like rotten fish, and it ran too smoothly. I watched, frozen, as her body wracked and heaved. When the stream ebbed, I fell on my knees and crawled towards her.

What I should’ve done was lift her, console her, change her out of her black-splattered nightshirt. What I should have done was call for her parents. But all I could do was hold her. She clung to me as if I knew everything in the world, and my heart, my teenage heart, went weak.

I sat with Jenny until three, rocking her. By then, her skin had turned wet and clammy, and her eyes had darkened to a dense, berry-juice black. My sight blurred with sleep. At some point, I felt her turn towards me, and then a warm, sucking pressure met my cheek.

In the darkness, I could just make out the shape of her new body. She had grown overnight, become five times herself. I was dense, dizzy. I sat as she explored my face, her rubbery touch leaving a trail of slime.

She extended one arm towards me, then another. I allowed her ten limbs to encircle me, snake around my ribs, under my arms, between my clothed thighs. I got one glimpse of her pink, rubbery face before her hooked beak caught me. It clamped my mouth so hard I tasted blood.

Her body was one thick muscle pulsing around me, through me. When she released her vice grip on my mouth, she replaced it with one of her arms. It thrashed past my teeth and forced its way down my esophagus. It leaked something that burned, digesting me with infinite care.

Then I bit down, hard, for the first time in my life. The arm heaved, an electric convulsion that sent bile rocketing up my gut. My insides swelled with a rush of sudden darkness. It shot into my skull and swamped my sight, swallowing Jenny and everything else.

Next morning, at the breakfast table, she ate little and said little. When the light hit her

just so, I swore I could see the faint bulge of her retracted tentacles. I tried to catch a glimpse of her eyes. Were they still the same color as mine (the reason that made her stare at me in fourth grade, in the way only fourth-graders can, and say you’re my friend now)?

She gulped three full glasses of water, and I imagined that she’d be drinking a lot more if she could use all ten of her arms. Her parents talked in low voices about stocks and college. Everything had changed, but only I knew the difference. I hid my mouth with a napkin, saw my toothmarks on the bread rolls come away black.

Ariel Chu is an Editor-in-Chief of Salt Hill Journal, a 2019 P.D. Soros Fellow for New Americans, and an MFA candidate in Fiction at Syracuse University. The winner of the Spring 2018 Masters Review Flash Fiction Contest, she was also a finalist in the 2018 Honeysuckle Press fiction chapbook contest. Ariel’s writing can also be found in Nat. Brut, Wildness, and Stirring: A Literary Collection, among others. Visit her at ariel-chu.com.

Photo by KAL VISUALS on Unsplash